·  A large terrestrial or aquatic ecosystem characterised by specific plant communities and formations, usually named after the dominant vegetation in a region is known as a biome.

· The earth’s surface, except ice-sheets and the most barren of deserts are covered by some sort of plant cover or biome.

·  No two biomes are alike. Geo-ecological and climate determine the boundaries of a biome. They may contain various Ecosystem, Ecotones etc.

· These biomes are important because humans depend on them for food, clothing, shelter, fuel, herbal-medicine, recreation, eco-tourism, natural resources and aesthetics.

·  A biome includes all plants, animals and soils where all the biota have minimum common characteristics and the areas of a biome are characterised by more or less uniform environmental conditions.

· The biomes of the world may be divided under two categories, namely –

1.    Terrestrial Biomes or Ecosystems (Forests, Grasslands and deserts), and 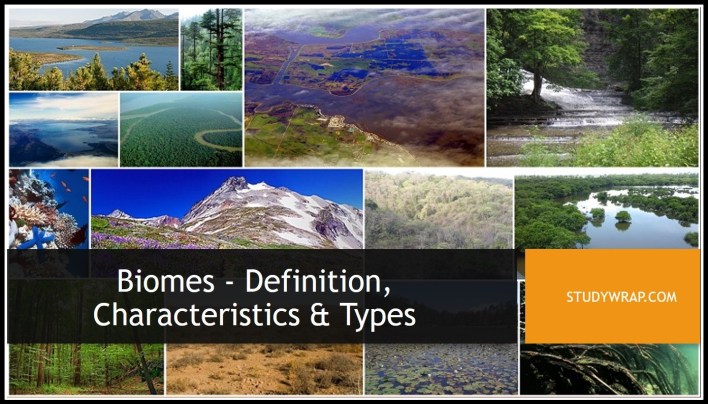 · Terrestrial Ecosystem is a self-regulating association, characterised by specific plant formations, usually named for the predominant vegetation and known as biome when large and stable.

·  Following are the major terrestrial biomes of the world –

a.   Arctic and Alpine Tundra Biome

a.   Steppe or Temperate Grassland Biome

b.   Savanna or Tropical Wet and Dry Biome (Tropical Shrublands and Grasslands)

o   Freshwater ecosystems, such as rivers, lakes and ponds;

o   Marine ecosystems, such as oceans, estuary and mangroves.

2.   Marine ecosystems – the water bodies containing salt concentration equal to or above that of seawater (i.e., 35 ppt or above). E.g. shallow seas and Open Ocean.

So this was all about the Biomes – Definition, Characteristics and Types. From the next post we will discuss all the types in detail one by one. You can read more on Environment and Ecology  – HERE.