Council of Ministers in State

·The State Executive consists of the Governor, the Chief Minister of the State, the Council of Minister in State and the Advocate General of the State.

·According to Constitution, each State shall have a Council of Ministers in State to aid and advise the Governor in the exercise of his functions. 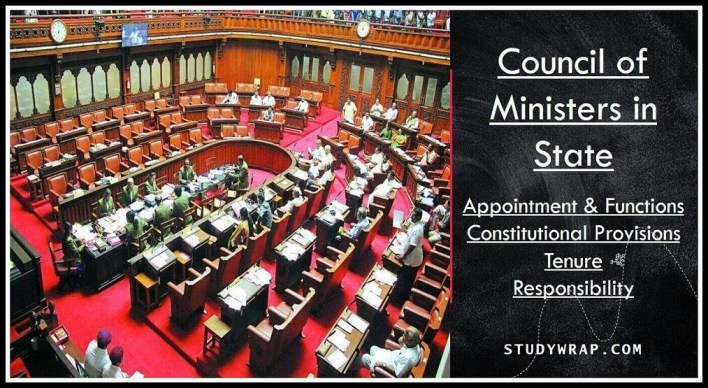 Constitutional Provisions for Council of Ministers in State

· There shall be a council of ministers with the Chief Minister as the head to aid and advice the governor on the exercise of his functions, except in so far as he is required to exercise his functions or any of them in his discretion.

Article 164—Other Provisions as to Ministers

b.  The ministers shall hold office during the pleasure of the governor

c.  The council of ministers in State shall be collectively responsible to the legislative assembly of the state.

Article 166—Conduct of Business of the Government of a State

a. All executive action of the Government of a State shall be expressed to be taken in the name of the Governor.

b. Orders and other instruments made and executed in the name of the Governor shall be authenticated by the rules to be made by the Governor.

· It shall be the duty of the Chief Minister –

a. To communicate to the governor of the state all decisions of the council of ministers relating to the administration of the affairs of the state and proposals for legislation.

b. To furnish such information relating to the administration of the affairs of the state and proposals for legislation as the governor may call for.

c. If the governor so requires, to submit for the consideration of the council of ministers any matter on which a decision has been taken by a minister but which has not been considered by the council.

Article 177—Rights of Ministers as Respects the Houses

· Every minister shall have the right to speak and take part in the proceedings of the Assembly (and also the Council where it exists) and any Committee of the State Legislature of which he may be named a member. But he shall not be entitled to vote.

·The members of the state legislature, either the assembly or the council, are appointed as ministers.

·The person who has been disqualified on grounds of defection shall also be disqualified to be appointed as the Chief Minister / Minister. (91st amendment).

Category or Composition Council of Ministers in State

· There are three Categories of Ministers –

a.    Cabinet: They attend cabinet meetings and play important role in state government.

c.  Deputy Minister: They are attached to cabinet ministers or ministers of state and assist them in their work.

Tenure of Council of Ministers in State

· The ministers holds the office during the pleasure of the Governor which means as long as they continue to have a majority support in the State Legislative Assembly.

· The Chief Minister can ask any minister to resign or he can advise the Governor to dismiss him.

· The Chief Minister can cause the fall of the ministry by tendering his own resignation to the Governor. As such virtually a minister holds office so long as he enjoys the confidence of the Chief Minister.

Oath or Affirmation of Ministers

· The governor administers the oaths of office and secrecy.

· In his oath of office, the minister swears –

o   to bear true faith and allegiance to the Constitution of India.

o   to uphold the sovereignty and integrity of India.

o   to faithfully and conscientiously discharge the duties of his office.

o   to do right to all manner of people in accordance with the Constitution and the law, without fear or favour, affection or ill-will.

· In his oath of secrecy, the minister swears that he will not directly or indirectly reveal to any person(s) any matter that is brought under his consideration as a state minister except as may be required for the due discharge of his duties as such minister.

Responsibility of Council of Ministers in State

·The Council of Ministers in State is collectively responsible to the legislative assembly of the state.

·The Collective responsibility means that the decisions taken by the Ministers are binding on all of them even if they differ in their views.

·If any minister differs in views with the cabinet and cannot provide valid reasons for it, he must resign.

·Alternatively, the council of ministers can advise the governor to dissolve the legislative assembly on the ground that the House does not represent the views of the electorate faithfully.

·The ministers are individually responsible to the State Legislature Assembly.

·The ministers hold office during the pleasure of the governor which means the Governor can remove the minister even if they enjoy majority in the house, but, this can be done on the advice of Chief Minister only.

·There is no Legal Responsibility of the Ministers in the States, as there is no Provisions in the Constitution.

·The Courts are barred from enquiring the nature of advice given by the ministers to the Governor.

Power & Functions of the Council of Ministers in State

The Council of Ministers in State performs the following functions:

· The Ministers formulate the policies of the government. The Cabinet takes decisions on all major problems—public health, education, prevention of plant disease, water storage, land tenures and production, supply and distribution of goods etc.

Administration and Maintenance of Public Order

· The Constitution empowers the Governor to make rules for the more convenient transaction of the business of the Government. All such rules are made on the advice of the Council of Ministers.

· The Governor has the power to appoint the Advocate-General and the Members of the State Public Service Commission. The Vice-Chancellors of the State Universities and members of various Boards and Commissions on the advice given by the Chief Minister with Council of Ministers.

Passing of Bills and Proposal of Programmes

·The Cabinet prepares the Governor’s Address in which it sets forth its legislative programme at the commencement of the first session of the Legislature each year.

·The Cabinet makes sure that all government bills will be translated into laws.

Control over the State Budget

·The State budget containing the estimates of income and expenditure for the ensuing year is placed by the Finance Minister before the State Legislature.

·The Legislature cannot take the initiative in the case of a Money Bill which must be recommended by the Governor and can be introduced only by a Minister.

Execution of Central Laws and Decisions of the Union Government

· The Union Government is empowered to give directions to the State governments in certain matters.

· The States should exercise their executive power so as to ensure compliance with the laws made by Parliament.

· They should not do anything which would hamper the executive power of the Union.

Cabinet of Ministers in State

· A smaller body called cabinet is the nucleus of the council of ministers which consists of Cabinet Ministers only. It performs the following role –

a.    Highest decision-making authority in the politico-administrative system of a state.

e.    Advisory body to the governor.

g.    Deals with all major legislative and financial matters.

Powers and Functions of Chief Minister