·  Articles 153 to 167 in Part VI of the Constitution deal with the state executive.

· The State Executive consists of the Governor of State, the Chief Minister, the Council of Minister and the Advocate General of the State.

·  It is stated that the Governor has a dual role.

a.    He is the constitutional head of the state, bound by the advice of his council of ministers.

b.   He functions as a vital link between the Union Government and the State Government.

·  The 7th Constitutional Amendment Act, 1956 aided the appointment of the same person as a governor for two or more states. 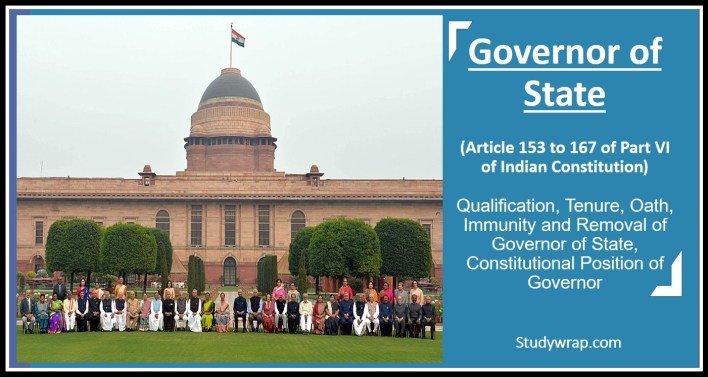 Appointment of Governor of State

·  The Governor is neither directly elected by the people nor indirectly by especially constituted Electoral College.

·  He is appointed by the President by Warrant under his name and seal.

·  The Draft Constitution provided for the Direct Election of the Governor on basis of Universal Adult Franchise. But, Constituent Assembly opted for current system of Appointment of Governor by the President.

a. The direct election of the governor is incompatible with the parliamentary system established in the states.

b.  Direct election is more likely to create conflicts between the governor and the chief minister.

c.  There is no point in making elaborate arrangements and spending huge amount of money for the election of the Governor who is only a Nominal Head.

d.   An elected governor would naturally belong to a party and would not be a neutral person.

e. The election of governor would create separatist tendencies and thus affect the political stability and unity of the country.

f.    The system of presidential nomination enables the Centre to maintain its control over the states.

g. The direct election of the governor creates a serious problem of leadership at the time of a general election in the state.

h. The chief minister would like his nominee to contest for governorship. Hence, a second rate man of the ruling party is elected as governor.

·  Hence, the Canadian Model of Appointment of Governor (State) by the President (Centre) was accepted by the Constituent Assembly.

·  Article 157 and 158 of the Constitution of India specify eligibility requirements for the post of governor.

·  A person to be elected as governor must –

·  It must be noted that there is no bar on re-appointment of a Governor, either in the same State or in other State.

a. The Governor shall not be a member of either House of Parliament or of a House of the Legislature of any State. If such a person is appointed as Governor than, he shall be deemed to have vacated his seat in that House on the date on which he enters upon his office as Governor.

b.  The Governor shall not hold any other office of profit.

c.  The Governor shall be entitled without payment of rent to the use of his official residences and shall be also entitled to such emoluments, allowances and privileges as may be determined by Parliament.

d. Where the same person is appointed as Governor of two or more States, the emoluments and allowances payable to the Governor shall be allocated among the States in such proportion as determined by the President.

e.  The emoluments and allowances of the Governor shall not be diminished during his term of office.

· The oath of office to the governor is administered by the chief justice of the concerned state high court and in his absence, the senior-most judge of that court available.

·  Before entering office, the governor has to make and subscribe to an oath or affirmation in which he swears –

a.    to faithfully execute the office

b.    to preserve, protect and defend the Constitution and the law

c.    to devote himself to the service and well-being of the people of the state

·  Every person discharging the functions of the governor also undertakes the similar.

Tenure of Governor of State

·  The Governor is appointed for a term of 5 years.

·  However, he normally holds office during the pleasure of the President.

·  He can resign before the expiry of the term or may be removed by the President earlier than completion of his term.

· It must be noted that, while appointing or removing the Governor, the President has to follow the advice of the Prime Minister.

·  The President may transfer a Governor appointed to one state to another state for the rest of the term.

·  The Governor whose term has expired may be reappointed in the same state or any other state.

·  A governor can hold office beyond his term of five years until his successor assumes charge.

·  The term of governor’s office is normally 5 years but it can be terminated earlier by:

a. Dismissal by the president (usually on the advice of the prime minister of the country) at whose pleasure the governor holds office. Dismissal of Governors without valid reason is not permitted. However, it is the duty of the President to dismiss a Governor whose acts are upheld by courts as unconstitutional and malafide

b.  Resignation by the governor

·  There is no provision for impeachment, as it happens for the president.

Immunity of Governor of State

·  The Governor of State enjoys personal immunity from legal liability for his official acts.

·  During his term of office, he is immune from any criminal proceedings, even in respect of his personal acts.

·  He cannot be arrested or imprisoned.

·  However, after giving two months’ notice, civil proceedings can be instituted against him during his term of office in respect of his personal acts.

Constitutional Position of Governor of State

·  In estimating the constitutional position of the Governor of State, following articles are important –

o  The executive power of the state shall be vested in the governor and shall be exercised by him either directly or through officers subordinate to him in accordance with this Constitution.

o  There shall be a council of ministers with the chief minister as the head to aid and advice the governor in the exercise of his functions, except in so far as he is required to exercise his functions in his discretion.

o  The council of ministers shall be collectively responsible to the legislative assembly of the state.

·  From the above, it is clear that constitutional position of the governor differs from that of the president in the following two respects –

a.  While the Constitution envisions the possibility of the governor acting in his discretion, no such possibility has been envisioned for the President.

b.  After the 42nd Constitutional Amendment, 1976, ministerial advice has been made binding on the President, but no such provision has been made with respect to the governor.

·  The governor has constitutional discretion in the following cases –

a.   Reservation of a bill for the consideration of the President.

b.   Recommendation for the imposition of the President’s Rule in the state.

c. While exercising his functions as the administrator of an adjoining union territory (in case of additional charge).

d. Determining the amount payable by the Government of Assam, Meghalaya, Tripura and Mizoram to an autonomous Tribal District Council as royalty accruing from licenses for mineral exploration.

e. Seeking information from the chief minister with regard to the administrative and legislative matters of the state.

a. Appointment of chief minister when no party has a clear-cut majority in the state legislative assembly or when the chief minister in office dies suddenly and there is no obvious successor.

b. Dismissal of the council of ministers when it cannot prove the confidence of the state legislative assembly.

c.    Dissolution of the state legislative assembly if the council of ministers has lost its majority.

·The governor has other certain special responsibilities to discharge according to the directions issued by the President. Although he has to consult the council of ministers led by the chief minister, but acts finally on his discretion.

·Thus, the Constitutional Position of Governor has dual role in the Indian federal system. He is the constitutional head of the state as well as the representative of the Centre.

In the Next Post (Click Here), we will complete the topic by discussing the Powers and Functions of the Governor. If you liked our Notes, do Subscribe our Facebook Page to get regular updates.

Powers and Functions of the Governor of State