· Depending upon the staining technique, Bacteria can be gram-positive or gram-negative. Let us have a detailed look at the difference between the two types of bacteria. 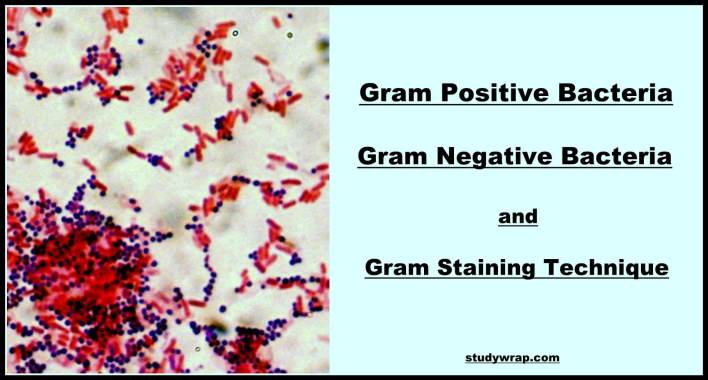 · Most of the Prokaryote have a rigid cell wall that protects the bacterial protoplasm from any damage.

· The major component of the bacterial cell wall is Peptidoglycan or Murein (made of mucopolysaccharide + polypeptide).

· The peptidoglycan gives the rigidity and strength to the Bacterial cell wall, thus, describing its shape and protecting the protoplasmic content.

· It is a polysaccharide made of two glucose derivatives, N-acetyl glucosamine (NAG) and N-acetylmuramic acid (NAM), alternated in long chains. The chains are cross-linked to one another by a tetra-peptide that extends off the NAM, allowing a lattice-like structure to form.

· The four amino acids of this tetrapeptide are D-alanine, L-alanine, D-Glutamic acid and L-lysine (in Gram positive bacteria) or diaminopimelic acid (in Gram negative bacteria).

· The NAG and NAM strands are synthesized in the cytosol of the bacteria. They are connected by inter-peptide bridges.

· From the peptidoglycan inwards all bacterial cells are very similar.

·Gram Staining technique was proposed by Christian Gram, a microbiologist, using Gram stain to distinguish the two types of bacteria based on the difference in their cell wall structures.

·  Gram negative Bacteria that take the color of the counterstain (usually Safranin).

· The Gram stain technique is based on the distinct structure of the cellular membranes and cell walls of the two groups.

· The iodine and crystal violet form a complex within the peptidoglycan. When decolorizer is applied to the cells, the Crystal Violet-Iodine complex remains within the cell wall, making it appear dark purple to blue.

· The alcohol decolorizer dehydrates the thicker Gram-positive cell walls, closing the pores as the cell wall shrinks during dehydration. As a result, the diffusion of the violet-iodine complex is blocked, and the bacteria remain stained.

· On Use of alcohol decolorizer, it dehydrates the outer cellular membrane, leaving holes in the membrane by dissolves the lipid layer and effectively washing the Crystal Violet-Iodine complex from the cell wall due to which it appear colorless. 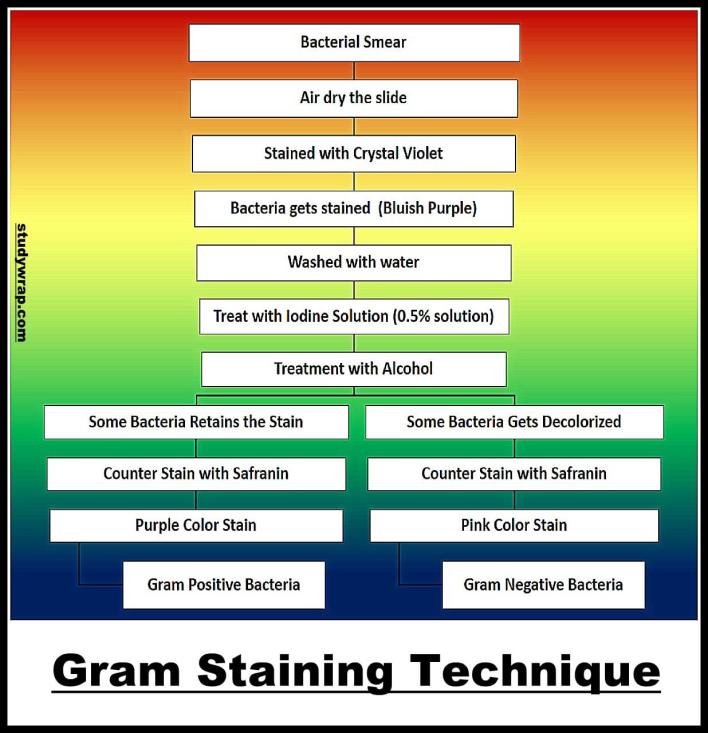 · The bacterial smear is stained with weakly alkaline solution of crystal violet. Gently rinse off the stain with water.

· Iodine is subsequently added as a mordant to form the crystal violet-iodine complex, so that, the dye cannot be removed easily. This step is generally referred as fixing the dye.

· Treat it with alcohol decolorizer until the solution appears clear. Gently rinse with water.

· Cover the smear with safranin, the counterstain, for 20 seconds. Gently rinse the stain with water.

· A counterstain of safranin is applied to the smear to give decolorized gram negative bacteria a pink color.

· Gram-positive bacteria constitute a cell wall, which is mainly composed of multiple layers of peptidoglycan that forms a rigid and thick structure. Its cell wall additionally has teichoic acids and phosphate.

· In the cell wall of Gram Positive bacteria, both horizontal and vertical peptide linkages are present, due to which mesh is dense and hence the stain does not come out.

· Cell wall of Gram Positive bacteria is thick (20-80 nm) and is destroyed by penicillin.

· Further outer layer of cell wall of Gram Positive bacteria is made of teichoic acid.

· Teichoic acid is an acidic polymer containing a carbohydrate (Eg. glucose), phosphate and an alcohol is found in cell walls of Gram positive bacteria.

· Teichoic acid has several roles to play in a cell like acting as receptor sites for some viruses, binding metals and maintaining cells pH in order to prevent its degradation by self-produced enzymes.

· The cell wall of Gram Positive bacteria is more homogenous and single layered and amorphous.

· In gram-negative bacteria, the cell wall is made up of an outer membrane and several layers of peptidoglycan. The outer membrane is composed of lipoproteins, phospholipids, and lipopolysaccharides.

· The Gram negative bacteria have cell walls that are more complex than gram positive bacteria. The cell wall is thin (8-12 nm) and hard and is not destroyed by penicillin.

· The peptidoglycan layer is very thin constituting only 10% or less of the total cell wall. There exists an outer membrane that covers the thin underlying layer of peptidoglycan.

· It also monitors the entry of various chemicals that are harmful in nature to the cell. 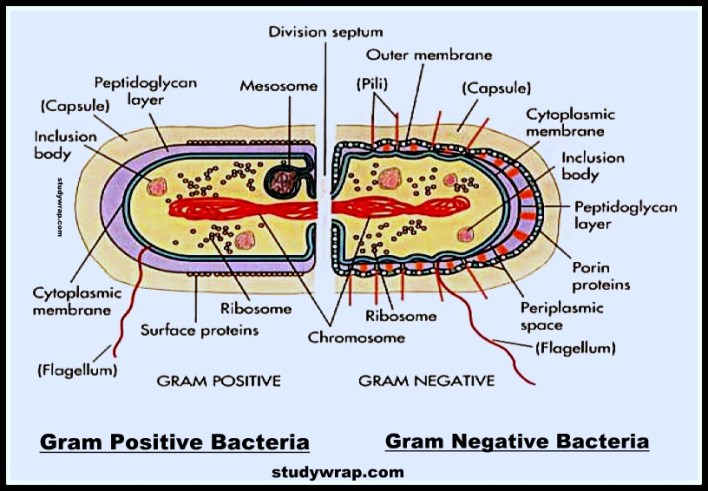 So, this was all about the Gram Positive and Gram Negative Bacteria and Gram Staining Technique. If you want to read more note related to Biology, then Click Here.